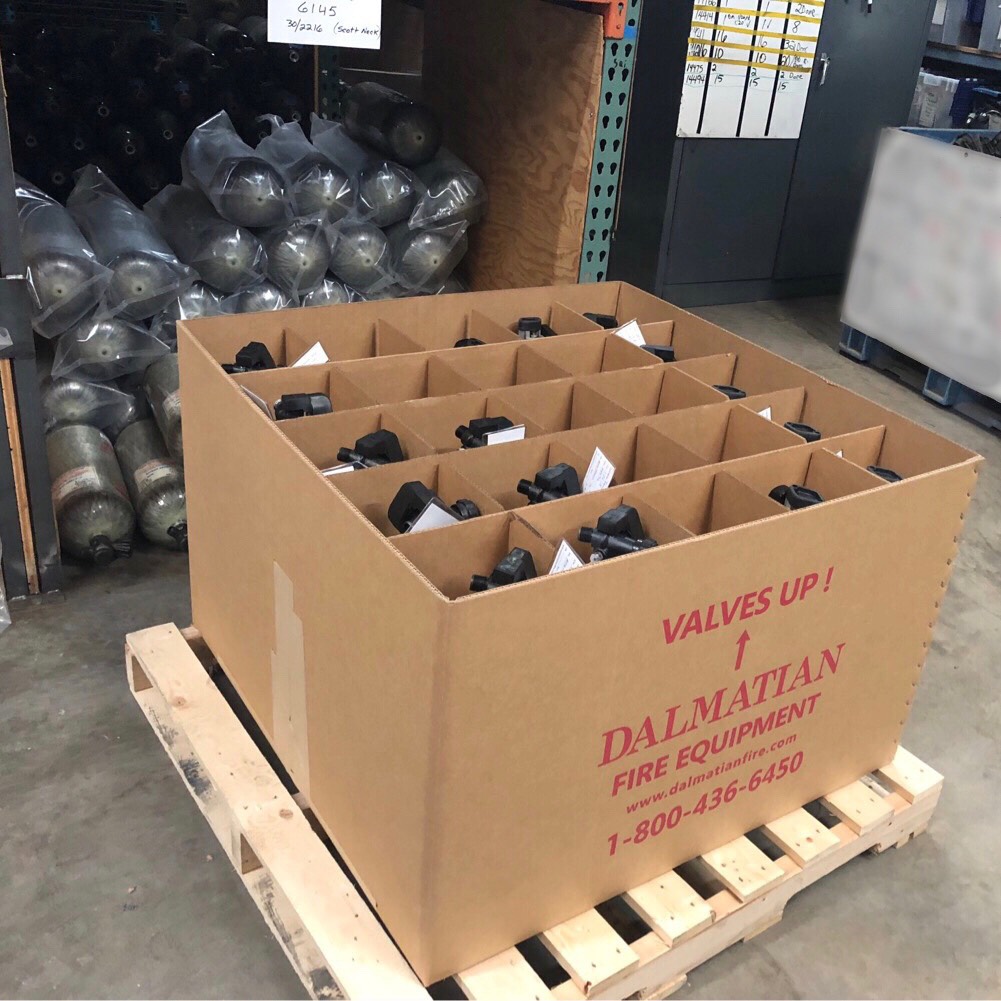 Cylinders are handled within a separate line in Dalmatians refurbishing process. Under this line, Dalmatian is regulated by the Department of Transportation (DOT) and certified with a DOT RIN number. This means that we are subject to random inspections to make sure that all of our procedures are followed.

After a cylinder is purchased, it is inspected again for external damage. Any nick, scratch or gouge is graded to level 1, 2, or 3, which determines if it’s not repairable, repairable, or cosmetic and does not need repair. We go through and evaluate each imperfection in our used cylinders. Once a level has been determined and the cylinder passes, we clean off all outer debris. We use the heated ultrasonic cleaners to alleviate one of the most difficult processes, which is removing the previous department’s identifying sticker.

We remove epoxy from the previous hydro testing and prepare the cylinder for its more current hydro test. This does require some hand scrubbing before moving the cylinder to hydrostatic testing. This complex process involves immersing the cylinder into a larger bomb proof cylinder. Water is then put in that cylinder and closed with a strong cap. The cylinder being tested is then pressurized, and we measure the expansion of the tank in micro centimeters to compare the expansion to what would be expected of a tank that was properly functioning.

The theory behind this is that as aluminum expands and contracts from air being filled and released over the years is that the cycling can cause micro-cracks to develop inside the cylinder. These micro-cracks will allow for the cylinder to expand ever so slightly more as the cylinder ages. Beyond a certain point that cylinder is no longer safe according to DOT. So we must measure the micro centimeters of expansion to see if it is within the stated range.

Once the cylinder passes the hydro test, we attach the date and RIN certification number to the cylinder and epoxy over it. The next test is an Eddy test of the threads. The threads, where the valve is attached, can also get cracks. If the threads become cracked it could become a hazard because the valve could come off or leak. The Eddy test uses electrical current to make sure the threads are perfect.

The next step is valve rebuilding. The valves only have a few moving parts, their simplicity is what makes them so robust. Valves are disassembled, cleaned, reassembled and installed on the cylinder that has been tested. Next we fill with every cylinder with breathing air and do an immersion test to ensure that the valve isn’t leaking after installation. It is a common test that is also used within the manufacturer’s factory. When you have 4500 PSI in a cylinder, it doesn’t take much of a hole to create a stream of bubbles. It is rare for the cylinders at this stage to leak, but we do the test to make sure. Air is then let out of the cylinder as we do not ship cylinders with air in them.